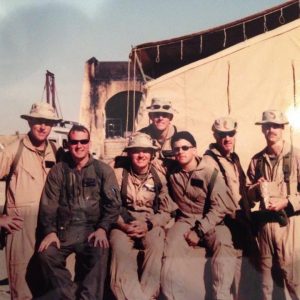 Matthew discusses the importance of stopping to think about the meaning of Memorial Day and shares his own story of losing a fellow Marine.

Matthew has experienced many lessons throughout the duration of his career, but there was one night in 2001 that ultimately changed his life and became the motivation for his life’s mission. During routine shipboard training off Marine Corps Air Station New River, NC, Matthew was the lead pilot of one of two CH-46E helicopters during training that night. Due to a ’12 second human error’ in the second aircraft, the helicopter impacted the water, killing three Marines, including Matthew’s good friend and combat air crewman.

Matthew would later learn that a similar mishap took place in a different training exercise a few years prior. Had knowledge from that experience been properly transferred after the first mishap, the 2001 training crash could have been prevented.

As a Marine Corps Helicopter Pilot, Matt spent much of his time as an instructor. Matthew became a Weapons Tactics Instructor (WTI)- the highest qualification for a Marine Corps Aviator. This role helped inspire Matthew’s love of teaching and training those around him.

Operation Allied Force (Kosovo) (1999)
Flew the CH-46E and was hand selected to become one of the first fleet aviators to fly the V-22 Osprey.
Weapons Tactics Instructor (2000)
Operation Enduring Freedom (Afghanistan) (2001)
Matthew was a member of the first Marine forces in Afghanistan after 9/11 where he led initial missions for the US while fighting in “Operation Enduring Freedom.”
Retired From the USMC (2007)
V22